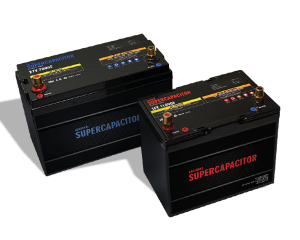 La Marche provides increased reliability for engine starting systems with the HCap Hybrid Supercapacitor. The supercapacitor is a device designed to provide bursts of power for applications requiring high power functions, such as engine starting.

In a Generator Starting Solution, supercapacitors are tied to a new or existing battery bank via La Marche’s Automatic Redundant Battery Selector (ARBS). The ARBS is designed with high-powered diodes to select the higher voltage available between two isolated DC power sources (ie: between a battery bank and a supercapacitor module).

The supercapacitor is charged via La Marche’s Ultra Series Charger (USC), which is a high-frequency switch mode charger specifically developed for supercapacitors used in engine-starting applications.

Here are some highlights for the supercapacitor module:

For more information, see the complete Product Data Sheet, or contact our office for product selection and pricing.

I am a novice on fuel systems and needed help with a detail, David jumped in and gave me direction and assistance. Thanks David

I was very impressed the first time I dealt with David. I was recommended to David’s company by our Cummins sales representative, and David helped me thru my first fuel delivery system project for a Florida Assisted Living Facility. He does not just send general cut sheets of systems, … but details such as pump HP values, cables sizes, fuel piping sizes, sensor requirements, etc. I would recommend him highly to anyone struggling with fuel system design.

After sending an email requesting immediate repair service, David Hurtado promptly replied with contact information for a local service provider that was also quite responsive and resolved our urgent issue the next morning. Super appreciative for the immediate response to our urgent request - made us look great in front of our client.

Kudos of the highest order to David Hurtado. Always responds quickly and professionally. Best manufacturer's rep in the business.

Our company has a very positive opinion about the service received from Hurtado.cc.
We feel confident in getting professional attention in an expedited manner, whenever we request a quotation from them.